I haven't really been doing much with new layouts lately, but I have created a couple of things that I've been wanting to do for a while.  First, I made a "Reader's Notebook".  I will use this with students as I travel from class to class and meet them in the library and hallways!  Most students in my building have some sort of a reader's notebook.  They keep lists of books they have read, lists of books they want to read, and there is also room for reflection (among other things, all teachers use these a bit differently).  I will use it mostly to write down book recommendations from others (professional, YA fiction, and my own "reading for enjoyment" books) and use in my conversations with kids.  I also have a space in there to write down anything I think is important about what I have read -- to recommend to others, to jog my memory when working with students, etc.  Like the kids, I will keep track of what I have read, too.  Most students in my building have a "book requirement", a goal to read a certain amount of books in all genres, etc.  I am working with a classroom and sharing my progress as well, so this is where I will also keep track of the books that I have read. 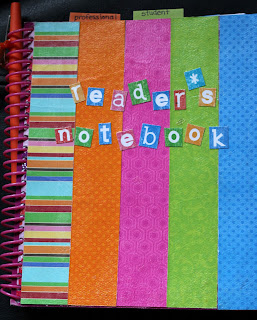 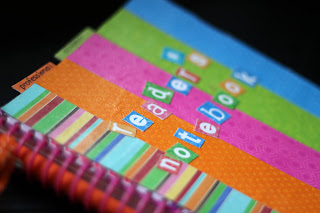 I used the same papers to personalize my iPad cover!  I saw this idea on Stacy Julian's website and "pinned it".  I've been dying to do it since! 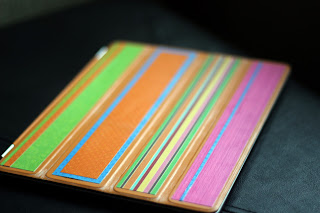 Email ThisBlogThis!Share to TwitterShare to FacebookShare to Pinterest
Labels: crafty

Last night I purchased the VERY LAST of these at Elise Blaha's shop on etsy:

I hope to try something similar to Ali Edwards December Daily, using Elise Blaha's cute little 4x6 book of mixed holiday papers.  It might be a bit much to tackle during this already busy holiday season, but if I don't stress about it too much it just might be fun!  Plus it will help me get into the groove of taking photos every day again in preparation for my 365 project in 2012 (actually, 366)!

UPDATE:  looks like Elise has added more of the holiday books to her esty shop!
Posted by orange gearle at 8:40 AM 1 comment:

Yesterday we visited both sets of grandparents and ate two Thanksgiving feasts!  My parents had a bit of a full house, but not quite all of us at the same time.  My brother and his family were leaving as we arrived -- off to his in-laws.  My nephew, Seth, and his wife stayed just barely long enough to eat and then they were off to two more celebrations!  My nephew Rich and his two kiddos were there longer than we were, and my older daughter Hollyanne and her family were there for quite a bit as well.  It was good to see them all.  After supper, my sister Jeanne, my mom, B. and her Daddy, Rich and his two kiddos, and I walked up to the school a few blocks away to play on the playground.  I didn't need to wear a coat!  Amazing weather!  I took a few photos, of course.  I uploaded about 32 to facebook and flickr, but I'll try to keep it down to just a few here.  :-) 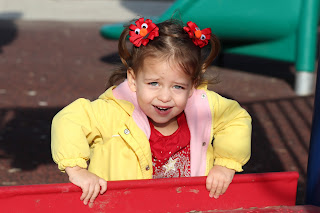 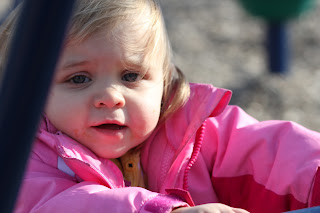 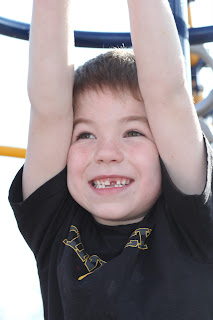 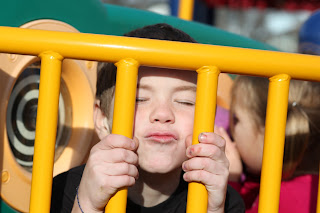 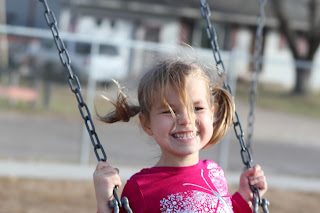 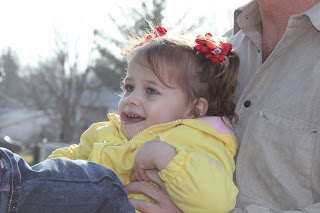 After my folks we went to Grandma and Grandpa B's house.  Grandma B. really  wanted a photo of B with her poinsettias.  I tried...but it was B's "run" time right before bed, so I mostly got blurry photos of her not looking at the camera.  This is what I'm left with: 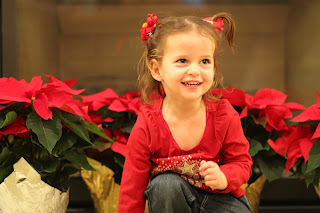 We pretty much did NOTHING today, which was NICE!!!!  I did try to do a bit of work on my scrapbook space.  I wanted to fix up the bulletin board area so that it looked a bit nicer -- it was all cluttered up with a bunch of stuff I ripped out of magazines for inspiration.  So, I took all the magazine pages and put them in a clear envelope, used the Cricut to cut out the letters for the word "inspiration" and attached the word to the envelope with colorful paper clips.  I was going to glue them on, and I still might, I haven't decided if I like it or not. 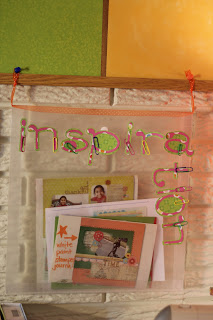 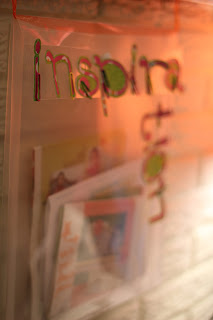 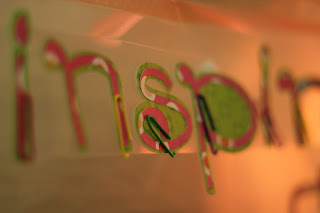 B. "helped" me, and her daddy snapped this photo with his iPhone: 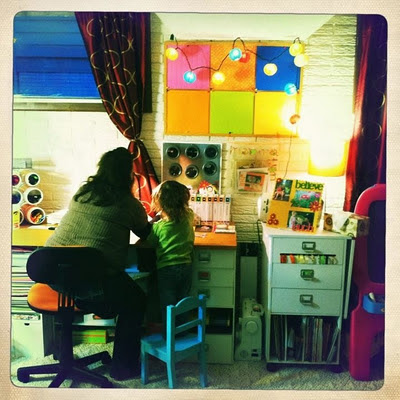 I don't like the way I blend in with the chair, making my butt look extra large...but overall, I like the photo and you can see the space a bit better.  The clear envelope is just under the bulletin board, hanging from it with a ribbon.  Now the bulletin board is ready for other bits of inspiration and photos!

B. made this turkey at daycare on Wednesday: 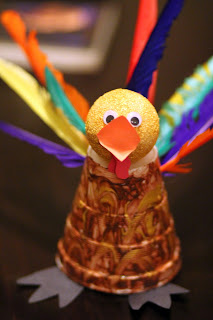 I won!!  I entered a challenge over at the Scrapbook Circle Blog -- Challenge #18 In Stitches.  My "imagine" layout was the winner!  It didn't win because it was awesome or anything -- only because it was the number that some random number generator on the internet picked!  :-)  But, I don't really care why I won, it's just cool that I get the "Hallow's Eve" Scrapbook Circle kit out of the deal!

I had my granddaughter, M., on Friday and finally got a few pictures of her that actually turned out!!! 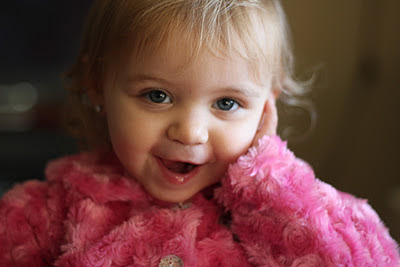 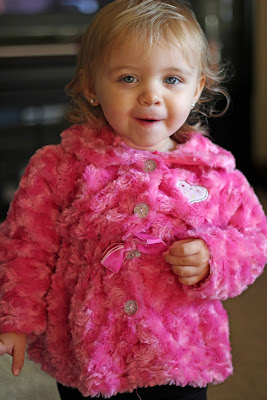 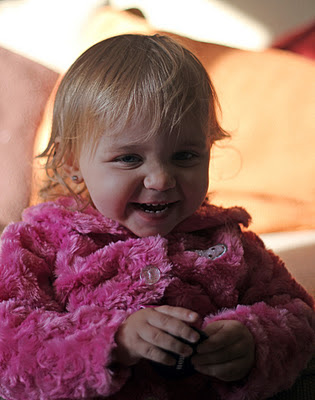 When we got home from work today, it was in the 70s and it's November!  I changed B's pants (after an EEEnormous poop -- her words) and she didn't want her jeans back on.  Before I knew it, she had put on her shoes and was outside with Daddy.  The sun was out, but beginning to lower in the sky, which made the lighting delicious.  So I grabbed my camera, loaded with my birthday lens, and took a few photos of the silly girl, outside, in November, without pants. 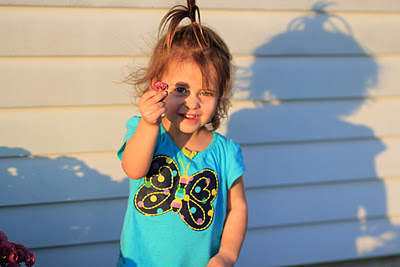 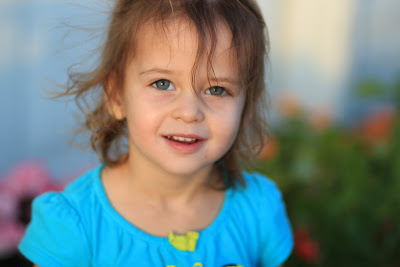 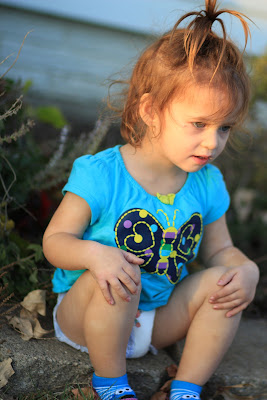 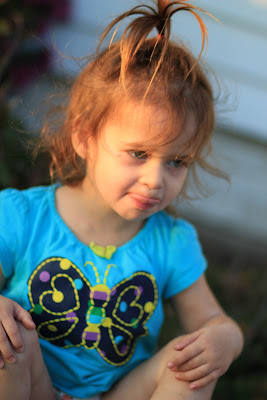 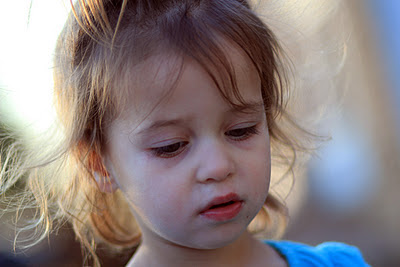 orange gearle
I'm a mom with a camera, an educator, avid reader, political junkie, and lucky enough to get to spend the rest of my life with my soul mate. 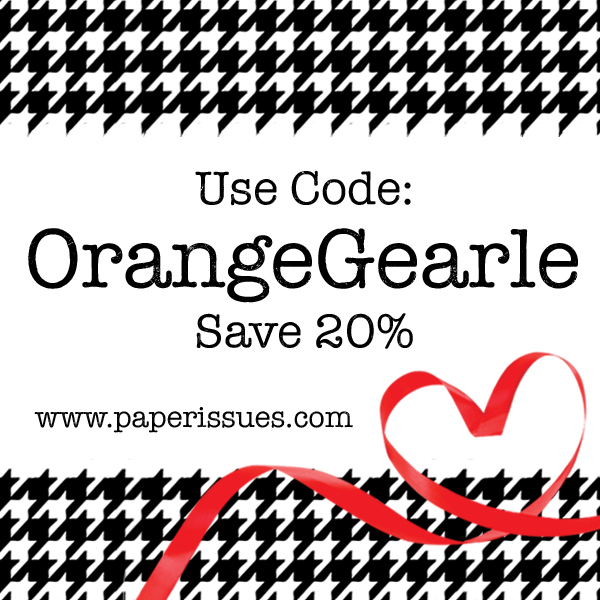 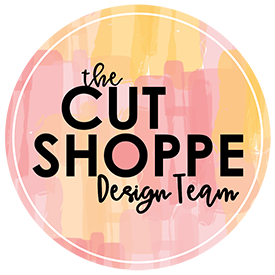 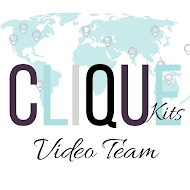